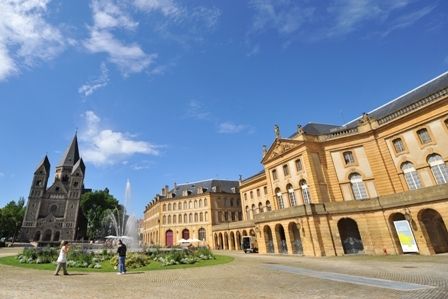 Construction of the theatre began in 1738 but work was delayed by a number of problems (war, embezzlement etc.). The first theatrical performance only took place 14 years later. The development of the site was completed in 1759. Built from 1901 to 1904 in grey sandstone and in Romanesque Revival style in the grounds of the Garden of Love at the end of the Place de la Comedie, the Temple Neuf is reflected in the Moselle River and its medieval charm contrasts in a picturesque manner with the classical architecture of the Opera Theatre.